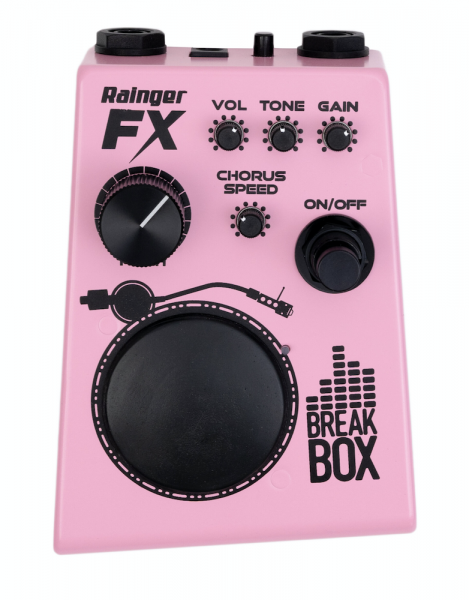 Break Box is a deceptively simple distortion pedal, with active sustain, and a record scratch trigger facility! Using their original El Distorto overdrive circuit, they’ve added the back half of a Tonebender circuit to end up with a deeply satisfying high intensity gain stompbox with colossal low end, plenty of mids a less ‘scooped’ sound than a Tonebender and searing highs.

And yet it’s incredibly quiet, noise-wise; when not playing, a noise gate quietly shuts off the hisses and buzzes you’d normally associate with this much drive.

About one second after the initial note attack, a chorus effect fades in adding a spatial element to the sound; from the up close chunk of the basic tone, it blooms into a room-like ambience. The speed of this chorus is adjustable, from a slowly churning grind to a fast psychowobble, and as this is added to the main sound it actively adds sustain; there’s a slight but noticeable building of the volume, with an excitement like a wave pushing you forwards...

To introduce this mighty sound to your audience, you can press and hold the turntable pad and turn your guitar into a trigger for a record scratch sound, like a DJ cueing up the guitar track that follows! The pitch/speed of this can also be controlled from a slow, hip-hop scratch to a fast, manic flick of the deck. The scratch itself is generated inside the pedal itself (not a recording). A slight random pitch variation keeps it sounding less ‘sampled’ and more human.

• Tasty chorus swells on every held note and chord