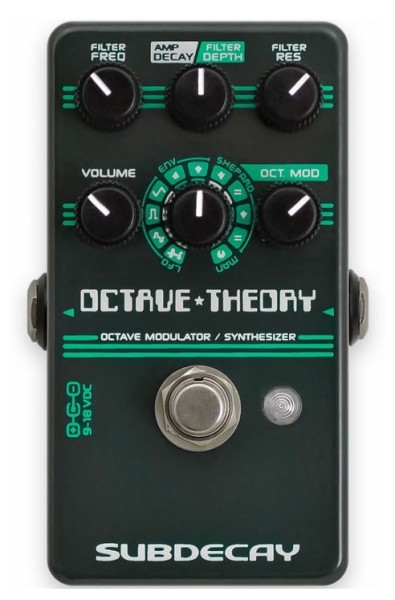 An array of knobs covered many early 1980s synthesizers. This gave you the power to create a wide range of sounds. Of course, on some settings the synthesizer wouldn’t make a sound, would go into uncontrollable oscillation, or make weird noises. Sometimes the weird noises weren’t the weird noises you expected.

The Filter: Resonant filter inspired by the Korg MS20. Like the MS20 the resonance knob can push the Octave Theory into oscillation. Most guitar synth pedals won’t let you go there. They think you can’t handle so much raw power. To be fair many of those filter oscillation sounds can get shrill or overbearing. If you keep the filter frequency low you can give your synth tones some growl. Use this power responsibly.

LFO: This is where you’ll find the chiptune sounds, especially with the square and double square wave modes.

Shepard Tone: As you work your way up the guitar neck playing higher notes, the octave cross fade descends.

When set = modes playing one octave higher will produce the same note. You can play up the neck forever and arrive at the same pitch whether you are playing an open low E or the high E string on the twelfth fret.

Manual mode: This is most similar to our original guitar synth pedal, the Octasynth, but with the most requested feature added. Instead of the Octasynth’s blend control which only allowed for one or two octaves down, the oct. mod knob takes you from three octaves down to two octaves up.