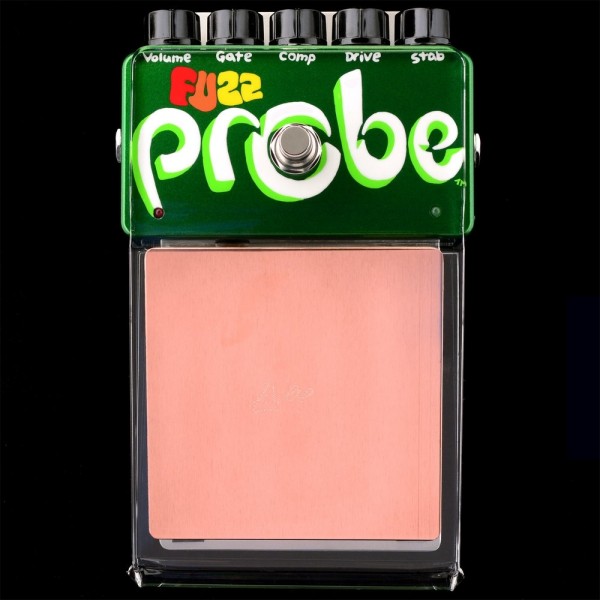 A wah-wah pedal with no rocker pot to wear out, it uses a proximity sensing radio transmitter so you can achieve super fast wah action and chewy sounds (pulling your foot quickly away), and it even has a Super Hard On™ built in so you can drive it to any volume you want.

This effect is a natural continuation of the probe series... the Fuzz Factory™ probe, the volume control/manual tremolo probe, and now a wah. It’s probably exactly what you think it is: a theremin-style antenna controlling a wah, getting brighter as your foot approaches. It has three extra features, however. There’s a Super Hard-On™ boost circuit in front of the wah, with a knob to set the exact level of boost for driving your wah sound. It can be turned up high enough to make the wah crack up a little for that “something’s gonna blow” sound. It gets pretty darn loud! There is also a “Mix” knob for dialing in the desired wet/dry mix of the effect, and a “Range” knob for controlling/limiting the ultra-bright upper range of this circuit.HOW IT WORKSThe probe circuit generates a small (one or two inches high) “bubble” of RF energy at about a million cycles per second above the antenna plate. As your foot or hand (or any wet or metallic object, for that matter) approaches the copper plate, the RF field is disturbed and the circuit reacts by increasing the brightness of an LED, which drives a pho-toresistive cell and controls the Z. Vex wah circuit. The wah circuit is actually the Seek-Wah™ sound circuit without the sequencer control. The only difference is the boost circuit in this Wah Probe™ model.