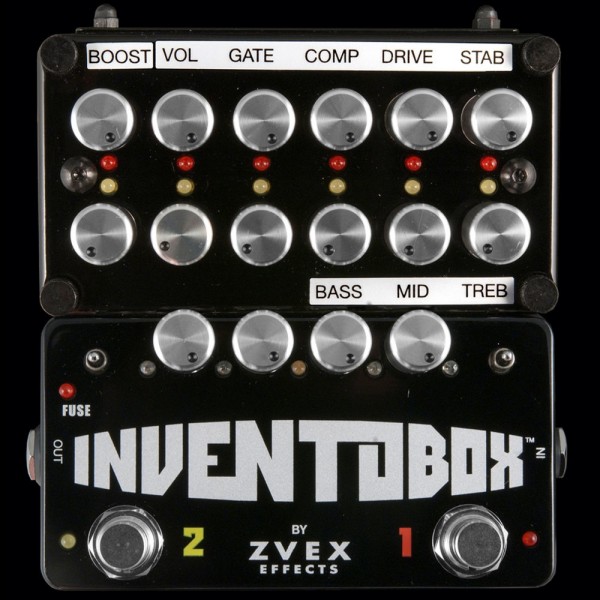 Ever want to build your own pedal, but weren’t interested in the soldering, drilling, painting, and all of the assembly needed to make one from scratch?The Z.Vex Effects Inventobox™ is a unique new product which allows you to quickly design, build and/or modify your own ped-als without soldering! The Inventobox™ comes with two different channels so you can build either one or two different devices into the same box. All of the necessary components are included to make it easy for you... there’s a variety of potentiometer values and switches all ready inside the box, quickly accessible through tiny sockets which accept standard experimenter socket wires or in-cluded cables. The unit is easily opened by hand to make fast modifications to the circuitry.The unit consists of four basic components: [1] The enclosure with 4 permanently-mounted 100k potentiometers (rotary controls), two 3-position switches, 5 multi-colored LEDs, and two stomp switches with on/off LEDs.[2] Inside the dual enclosure is a window which contains connectors to access the input and output for channels 1 and 2, an LED work light to see the connectors more clearly, a 9VDC power connection, and various connectors for the multi-colored LEDs and potentiometers.[3] The lid for the upper part of the enclosure which contains 12 removable potentiometers (the order and values can easily be changed), 12 LEDs, and sockets which let you easily hook up wires from your pedal circuit to the various controls and LEDs.[4] The lid also has a removable brass shielded tray which contains an experimenter’s socket where you build up your circuits.